Spending a Week in SoCal

I took a work/personal trip to Los Angeles and San Diego which is was a welcome change to cold weather that is settling in to DC, it looks like snow flurries at the end of this week.

It also didn’t hurt that I was staying at the Ritz Carlton in Marina Del Rey (at the government per diem rate) and this was the view out my window for a few days.

This was the first time I have stayed at Ritz Carlton and it was very nicely decorated for Christmas.  Everything was extremely fancy and I felt out of place, for example the hotel gift shop was a diamond store. I felt like I was in a museum and shouldn’t touch anything because I might break it.

I really enjoyed the robes in the hotel room and wanted to take one home, but unlike taking the little shampoos this was very clearly frowned upon.

I got some training in while I was there, taking advantage of the opportunity to run in shorts and a t-shirt in December. On Tuesday I took a quick run to Venice beach after I checked in to stretch out the legs after the long flight.

Wednesday I visited the weight room and Thursday I was up before dawn to get in an interval run before work. It was very peaceful running along the marina in the moonlight and then I followed a paved path on the beach as planes were coming in from the west to LAX.

To illustrate how early I was up, this is the view from my room after I was done with an hour and 15 min run and showered. But because I tend to stay on east coast time when I travel it really wasn’t to bad getting up early.

Friday morning I took the train to San Diego for a quick trip to visit some friends.

When I got to town I got some late breakfast by the beach and  got in a quick swim. The afternoon was a trip to UCSD aquarium to see the creatures. 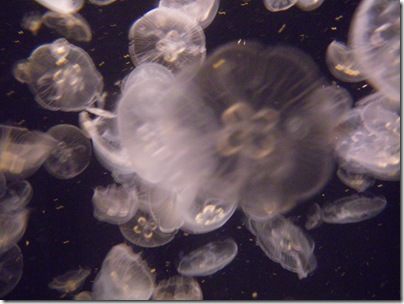 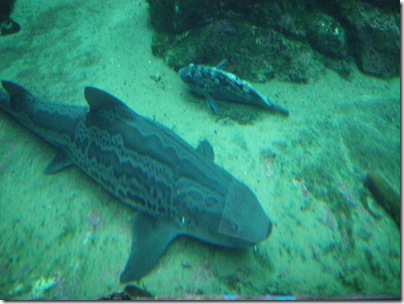 And get attacked by a Great White shark. 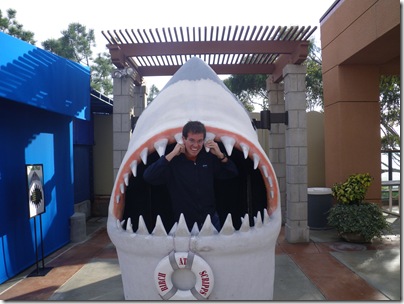 Saturday morning I went inland to play some golf. I didn’t play too great but I don’t play that much anymore so I have no expectations when I go out to play. The course has some of the smoothest greens I’ve putted in a while. The layout had a lot of variety to keep things interesting with a few holes that involved tee shots carrying a canyon or hitting down into a valley.

In the afternoon I went for a run to Torrey Pines and back. Last time I was here I went up the hill to the top of Torrey Pines when I got to the park but this time I noticed people running on the beach and decided to try it. Unlike the east coast beaches I’ve been to that have soft sand, the sand here was very firm and I was able to run in my shoes without having to worry about sinking. I was able to run along the beach for a few miles enjoying the ocean and cliff scenery.

Saturday night was a good sea food dinner of Swordfish right on the beach with a view that never gets old. 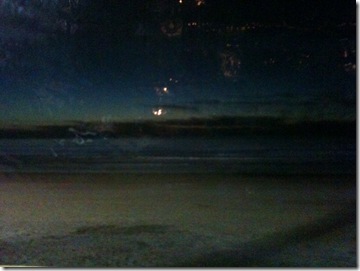 Sunday was an awesome breakfast of Strawberry Walnut pancakes that I will probably try to recreate this weekend. The place with in La Jolla overlooking the ocean and while eating breakfast I could watch some triathletes getting in a morning swim and then I went down the block to visit seal beach.

After that it was time to catch a quick flight from San Diego to LAX and then back to Dulles where I was greeted by a windy 28 degree evening, reminding how awesome the weather is in Southern California.

This entry was posted in Uncategorized. Bookmark the permalink.